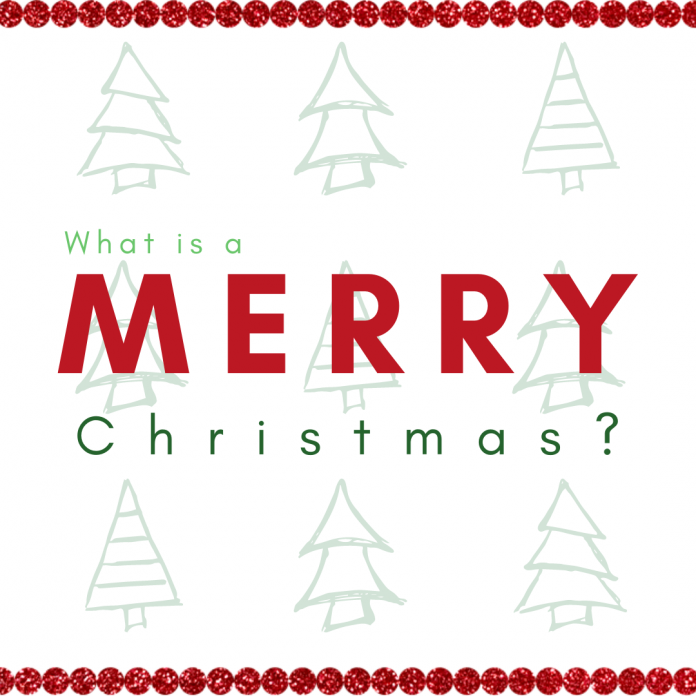 That word “Merry” is a strange one with both the brightest and the darkest of meanings. It is used a dozen times in the Bible to describe people who were drunk and acting irresponsibly – hardly a Christian virtue. The man who said, “Eat, drink, and be merry,” was judged for a fool (Luke 12:19-20).

On the other hand, Proverbs 17:22 (KJV) tells us that “a merry heart doeth good like medicine.” So, which is it? Wouldn’t you like to know before you go wishing anyone else a “Merry” Christmas?

I found two common uses of the word, going back to the 1500’s, when the greeting “Merry Christmas” first appeared in print. First, there was “Merry” England. The expression painted an idealistic picture of a peaceful and prosperous land. It had none of the earlier associations of wanton drunkenness, but rather it described a gallant and hopeful people living and working together, joyful and free from fear – the very image of “peace and goodwill” from the angels’ proclamation to the shepherds of Bethlehem. And, therefore, it would be a very appropriate Christmas wish.

Then there was also a band of outlaws known as the “Merry” Men. The best-known of these, of course, was Robin Hood. Though I am sure they drank their share of mead, the word “merry” seems to refer more to their team spirit. Based on their mutual bond, their spirit was a joyous confidence in the face of danger, a loyalty to their chief, and a singleness of purpose. And with that bond, they struck fear into the hearts of their adversaries and made a mockery of them.

So think back to that first Christmas. The shepherds are quietly watching their sheep on the hillsides of Bethlehem when a blazing angel strides out of the dark night to make this astounding proclamation: “Fear not, for behold, I bring you good news of great joy that will be for all the people. For unto you is born this day in the city of David a Savior, who is Christ the Lord.” (Luke 2:10-11)

What happened next? Well, suddenly there was with the angel a multitude of the heavenly host praising God and saying, “Glory to God in the highest, and on earth peace among those with whom He is pleased! (Luke 2:13-14)

These were no Christmas-tree angels. This was the Heavenly Host, as fearsome and, dare I say, as “merry” a band of mighty warriors as you could ever hope to meet, come to accompany their Commander, temporarily disguised as a helpless baby, into the world. This was a Landing, an Airborne Invasion, a Cosmic D-Day. He had not come alone. And the outcome of His mission was never in doubt, even on that awful day 30-some years later when the Adversary was given the chance to do his worst. Seven centuries before, in Jeremiah 31:10-14, (and especially in verse 13) the prophet had seen the outcome of the Mission:

“Then shall the young women rejoice in the dance, and the young men and the old shall be merry. I will turn their mourning into joy.”

And that is what we are proclaiming and what we are looking forward to when we say, “Merry Christmas.”