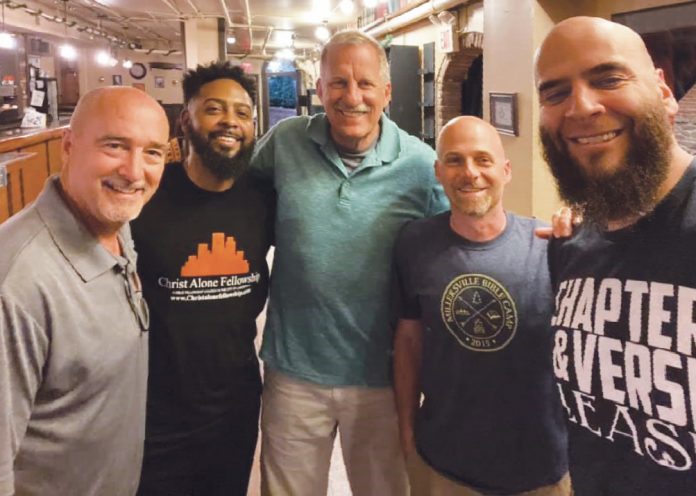 After George Floyd was killed by a white police officer, a fresh wave of outrage over race relations washed over the United States. This outrage was displayed by peaceful protests, destructive riots, and blacked out social media proﬁles.

I asked Church Planter Los Morales and church member Wayne Cooley from Christ Alone Fellowship in Lancaster City about their perspective on race relations and the church.

RS: What can the church do in the midst of this current outrage over race relations in our nation?
Los: The local church needs to be hands-on in their neighborhood. Meet the needs in your community. Build relationships with the cops. I don’t want to boast about what Christ alone does for the community, but we do a lot to meet people’s needs. The Church should always be there because the issues will always be there.

Wayne: The church needs to walk and not just talk! Like I always say, “ the world is gonna world, but the church needs to church.”  We have a different worldview than those who are rioting. I’ve also heard from some people who were vocal about the looting but not about the murder. That doesn’t come from a Biblical worldview either.

RS: Everyone is talking about police brutality! Some people are ignoring the issue and others talk about it all the time especially on social media. What’s the best way for me to respond?

Wayne: It’s not just a recent thing. Some people who are vocal now were not vocal about racism and police brutality in 2014 during the Eric Garner case.

Los:  Yes. We only see outrage when the media makes it important like what happened with George Floyd. But we need to remember that social media isn’t always the best way to communicate. Talk to each other instead of making statements. On social media people could make mistakes in understanding someone’s tone or knowing when someone is really hurting.

RS: Is “Just Preach the Gospel” a sufficient answer to racism?

Los: I have faced criticism from others in the church for saying that the gospel is enough of a solution. It sounds simple, but it actually is complex. It’s not just an easy formula. The gospel is not void of good works. It’s not void of giving someone on the streets a place to live or giving representation to someone who was bruised up by a cop. At the heart level, the gospel is the answer, but it also compels us to follow through with our good works.

RS: What attitudes do I need to examine in myself and my church to make sure that I stay far away from adopting racist attitudes and actions?

Los: It would help us all to be humbled before our holy God so that we look at our neighbor, no matter their skin color, as someone who is as much in need of being made right as you are. The differences we have start disappearing when you really understand God, sin, and your violation of His law. I would encourage us not to point at others as the problem, but to start with ourselves as the problem. See our issues before God and then serve one another with humility. Jesus set that example for us. He calls us to be preoccupied with unity, preserving fellowship in the church. To worship under one roof is hard when we have prejudices and exalt preferences over Scripture.

Los: I know it’s hard. I’ve been in circumstances where I have been treated differently simply because of how I look. It doesn’t feel good. But by following in Christ’s footsteps I am going to love those who did that. That’s a good step for us to do that in the church so we can be a witness to the world. We don’t have room to divide in the church. Loving one another will spill over into beautiful friendships in the church regardless of our differences.

RS: I have been pretty quiet on the topic of racism not because I don’t care, but because I don’t really know what to say. I want all my brothers and sisters in Christ who have been victims of racism to know that I care for them and the pain they are going through even though I am not saying much about the topic.

Wayne: God gives us each things that we get ﬁred up about. I get ﬁred up about fatherlessness and broken homes. I may not get ﬁred up about the things you are passionate about, but I am willing to listen. Obviously we need to address racism in the church, but there is only one man we are called to identify with and that is Jesus.

Rachel Schmoyer is from the Whitehall Bible Fellowship Church.

A MISSION OF RELATIONSHIPS

Confessions of a Weaker Brother